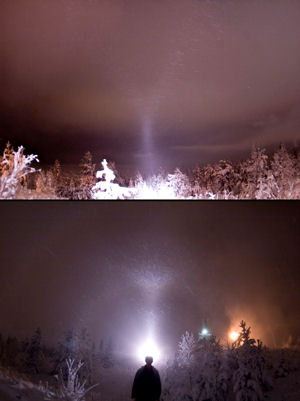 Last night diamond dust formed again in Rovaniemi with help of Ounasvaara ski resort snow guns. Two photos of what was seen in the light beam of a bright lamp are shown here.

In the upper image are diffuse anthelic arcs. In the lower image a number of common halos are seen together with Moilanen arc. Three white strikes extend from lamp to different directions to the left. Possibly these are parhelic circle (and parhelia), helic arc and superparhelia. Or, some of them may be artefacts formed by the lamp reflector.

Temperature was -6°C and it was overcast sky. The display was limited to the vicinity of the snow guns, these photos were taken at the top of the skiing flank. I was not able to get very far from the lamp, which accounts at least partly for the numerous separate crystals and diffuse looks of the halos. The lamp was on the elevated ground, but I did not make an estimate of the lamp angular elevation.

These are just two randomly chosen photos and may not represent the best output. Much more photos were taken, including crystal photos. I will return to these at some later time.