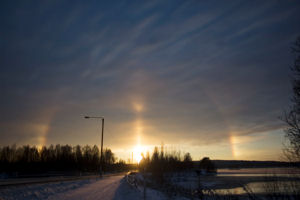 Yesterday it was halos from sunrise to sunset in Rovaniemi. I was biking in the outskirts of the town in hope of getting into the heat of the things, but as afterwards many people told about good halos in and near the center, I think I missed the best action.

Anyway, here is a photo showing Moilanen arc towards the end of the display. The image is stacked from 14 frames taken during one minute. The ice cloud was elevated, only sparse crystals were glittering on the ground. Halos were generated by the snow guns of Ounasvaara ski center. Machines will be running continuously for the next three weeks as soon as it is at least -5°C, so more displays may appear.

Next night pillars were present, but the crystals were not that good.