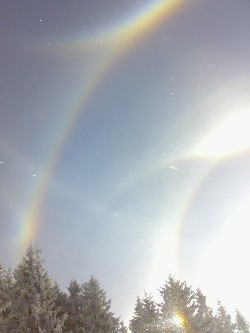 One of the most striking halo displays of recent years in the Czech Republic was observed on December 25, 2007 in Destne in the Orlicke Mountains. Diamond dust halo phenomena highlighted the sky shortly after 12 local time (CET) and lasted until sunset.

While skiing, Radek Svoboda took several shots with his cell phone camera and captured a variety of halos including ones like Tape arc (Parry supralateral arc) and heliac arc, as shown by the photo beside. See also another image.

After the inspection of rest of the photos, even diffuse arcs turned up.

Some of the images are featured in the gallery, other uploaded halo photographs of Czech observers can be instantly browsed on the latest uploads page.