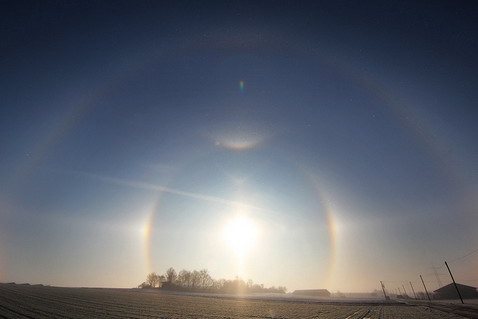 On the morning of 25th January 2012, I observed a large halo display near Achsheim, a little village north of Augsburg/Bavaria/Germany (450m elevation). Beside this village, there’s a little river called Schmutter. It’s not a skiing region and there are no snow cannons.

The day before it was cloudy and it was snowing a little bit, during the following night there weren’t any clouds and in the morning there was „normal“ fog. The minimum temperature in the night was about
5 °C below zero.

I don’t know when the halo display began, because when I reached this region full of ice crystals it existed already. And it still existed when I left the region (10:00 a.m). I took photos of it from about 9:25 until 10:00 a.m (CET).

You can see well the 22° halo, sun dogs, supralateral arc, the upper tangent arc, circumzenithal arc, tape arc, infralateral arc and last but not least the Moilanen’s arc. All phenomenas were seen all the time I was there. ( 1 – 2 – 3 )