Home › Displays › Superb Lowitz and helic arcs from the USA 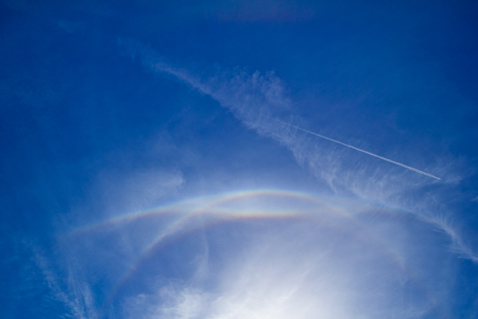 The display was seen at and/or just after high noon from eastern Nebraska about 41 degrees north, on November 7. My sister had called about some geese at a refuge nearby and wanted to go photograph them. I was going to visit my parents, like I often do, and decided I may as well take my camera gear with so if I went to the refuge I’d not have to stop back home. This is the only reason I even had photo gear with me. I stepped outside to do something, and right away saw the parhelic circle extending out a ways, something I’ve never seen before and I have at least seen a number of optics displays now (lunar fog bows, light pillars, lunar vivid coronas, etc)….so I look often enough for stuff. I pointed it out to my uncle as I sprinted for my car to get my gear and he thought, “it’s not just a cloud”. I said no, it’s an arc, watch. I took my camera and sprinted up the hill behind the house.

I soon was seeing “sun dogs” on the parhelic circle. I then was clearly seeing the Wegener arc inside the parhelic circle. It was very vivid as with my eyes I could clearly see the rainbow colors. To be honest I never did see the Heliac arc before. I was flipping through pictures inside later and it simply jumped out. I was like, what is that arc..then looked it up.

The top of the 22 degree halo visually looked crazy most of the time. Very clear and colorful and odd arcing. I thought it was just an intense circumscribed arc in there but it didn’t look placed right and like more was happening. ( 1 – 2 – 3 – 4 – 5 )

The show only lasted 30-40 minutes I’d guess. Then it was pretty hard to get any optics at all. What was strange was visually nothing much was changed about the sky. I was watching for hours so there were different periods of less contrail garbage blocking out the sun. I had friends in Omaha, 20 miles south, and Lincoln another 45 miles south of that, looking too. They never saw anything good. They watched till sunset too, but they also didn’t get out as soon as I was and that was the best part. I wonder what I missed before I got out.

The satellite loop for that day may give the key ( 6 ). I’m located in eastern NE which is at the top center. It was much like the crystals you get right behind a blizzard in air just where it is clearing behind the storm. You can see a more puffy nature to the clouds, they pass and the ice crystals are left in the air. That stuff on satellite is below typical cirrus level/flight level…but still up there. It for sure was different than normal cirrus. A lot of that “cirrus” in the shot is left over form all the contrails. Once the sun got lower you could see the moisture/clouds clearly below the contrails. So anyway, probably worth noting the clouds coming across at the time were more along the lines of mid-level clouds/moisture.