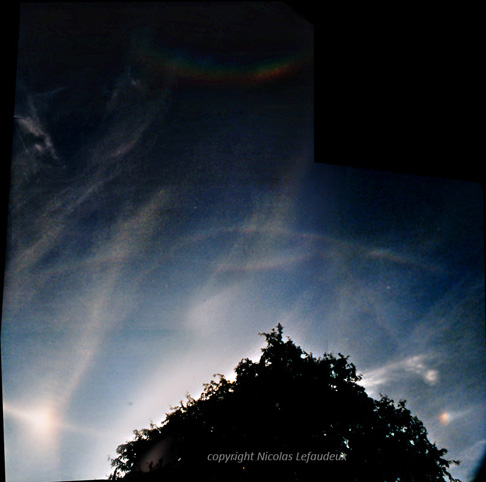 Last weekend, I visited my parents in Normandy. I took advantage of my visit to dig through my old astronomy journals of observations and pictures. I was looking for my records of what has been my best halo display. In my memories, it consisted in extremely bright left parhelion, bright circumzenithal, and a combination of suncave Parry and upper tangent arc.

From my notes, the display happened on September 18th, 1998, between 17h15 and 17h55 local time. The sun was at 24 degrees altitude at the middle of the display. At that time, I had little knowledge of the halos. I just knew from astronomy books about parhelia, 22° and 46° halos. I had observed before upper tangent arc (which I called upper 22° parhelion) and circumzenithal arc (which I called upper 46° parhelion), but never Parry arc.

During the display, I was mesmerized by the colourful upper suncave parry arc and by the parhelion brightness. My notes are focused on these arcs, especially the Parry one, with detailed description of its length, width, brightness and colors. Nothing on the Lowitz arcs except the sketch which shows radiating arcs from parhelia.

The stitched picture shows almost complete upper Lowitz arc, very long Parry arc and faint 22° halo. There are also some weird bands on the bright parhelion. I think I have some memories of shadow bands running across the parhelion, a bit like in the video by Anna Herbst ( http://spaceweather.com/swpod2010/11feb10/anna-herbst1.mov?PHPSESSID=liolll4f05nuq4m9ascc45gpg5“>5 ), but cannot be sure as there is no mention of these in my notes.