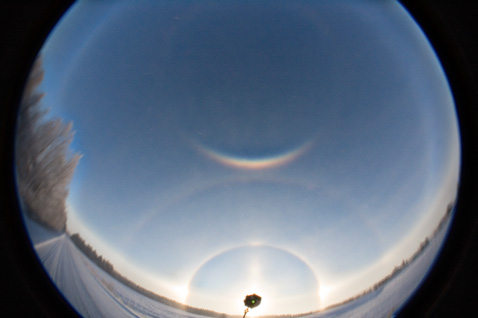 On the 17th November I drove 250 kilometers to the town of Sotkamo to check if there were any diamond dust halos. Two weeks earlier I had made the same trip, but the snowguns hadn’t produced any halos. This time, however, the ski resort was surrounded by a thick fog cloud in which diffuse halos were visible.

I started searching for a better spot and after a while of driving the cloud started thinning. 22º halo, parhelia and M-arc were present and I took ice crystal samples before continuing the search. Several kilometers later it started looking really good and I stopped the car by a field where the view was unobstructed.

The parhelia were extremely strong, and I made my first observation of 44º parhelia. Other halos were 22º halo, sunpillar, subsun, subparhelia, upper tangent arc, circumzenith arc, 120º parhelia, 46º halo, parhelic circle and M-arc. The 120º parhelia looked like fuzzy pillars.

I took several hundred photos and ran out of memorycard. Luckily I had an old camera with slide film, but as it also ended pretty fast, the only solution was to get a new memorycard from the local town over 10 kilometers away. When I was back, the display was still going on, but the new card also got filled up in half an hour. So it was time to get home.

Next day, as I was having a closer look at the photos I couldn’t believe my eyes what appeared on the screen. The circumzenith arc had a faint extension going all around the zenith: the Kern arc. See this photo, which also shows reflected Lowitz arcs. In some of the photos the 46º halo has an angular appearance revealing the 46º contact arcs , which were first photographed in Muonio a year ago ( 1 – 2 ).

Although readily appears in simulations, the Kern arc has been controversial because of the lack of photos. It was first reported by H.F.A Kern in 1895 in the Netherlands and at least six subsequent reports are known. As an explanation for Kern arc formation, raypath 1-3-5 in plate crystals as well as multiple scattering has been suggested. In the Sotkamo display there were 44º parhelia indicative of the latter, but it is not certain whether this mechanism is applicable higher up in the sky where the crystal cloud is optically much thinner.

Single scattering raypath 1-3-5 produces Kern arc easily, especially when the crystals are towards triangular shape and the sun is low. Both of these circumstances were realized in the Sotkamo display where the sun elevation was six degrees and a considerable number of crystals were semitriangular. As for crystal aspect ratio, it is thick plates that are favourable for Kern arc formation. The crystals in the photos seem to be below optimum thickness, but it should be noted that the crystal samples were collected before the peak of the display when Kern arc was not yet occurring and thus the sample may not fully representative.

The simulation of the display was made with populations of plate, Lowitz and column crystals. Fixed multiple scattering probability (0.15) was applied for all populations. Plates were semitriangular and the Kern arc in the simulation is primarily from single scattering 1-3-5 raypaths. Multiple scattering makes the 44º parhelia. Poorly oriented spinning Lowitz crystals made the 46º contact arcs and Lowitz arcs. It is noteworthy that the apparent 22º halo in the simulation is actually made of Lowitz arcs, which may also have been the case in the display. Columns made the weak 22º upper tangent arc. The simulation was made with a program by Jukka Ruoskanen

During recent years we have seen photographs of numerous displays with very bright parhelia. It is probable that at least some of them involved the Kern arc. This might be worth keeping in mind when the next bright plate crystal display comes along.

View all posts by Make →