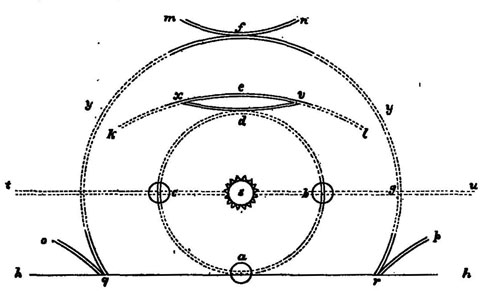 The famous halo drawing by explorers William Edvard Parry and Edward Sabine does not contain all halos they observed. These missing features are described in their account of the display. First, the parhelic circle was complete with anthelion:

“r p, q o, arches of large circles, very strongly prismatic, which could
only be traced to p and o; but on that part of the horizontal circle
t u, which was directly opposite to the sun, there appeared a confused
white light, which had occasionally the appearance of being caused
by the intersection of large arches coinciding with a prolongation of
r p, and q o.”

Possibly there were traces of the white arcs from column crystals, which caused the occasional impression of anthelion being caused by the extension of infralateral arcs (r p, q o). At least later these faint white arcs became so clear as to make further note of them:

“At 90° from the sun, on each side of it, and at an altitude of
30° to 50°, there now appeared also a very faint arch of white light,
which sometimes seemed to form a part of the circles q o, r p; and
sometimes we thought they turned the opposite way.”

Subhelic arc coincides with 46° infralateral arc at the drawing’s sun elevation. Most likely, however, there were other arcs as well, Wegener and helic arc, which added to the confusion. And finally, also 46° Parry arcs were observed:

“In the outer large circle, we now observed two opposite and
corresponding spotsonding spots y y, more strongly prismatic
than the rest…”

The halos were seen in Canada’s Melville Island on 9 April 1820. The display was long lasting; from 1 at least until 6 pm. Observers paid also attention to sun elevation depended changes in the halos by noting the growing distance between upper tanget arc and Parry arc and the shape change in tangent arc. The excerpts of the observational account are taken from Hasting’s “A general theory of halos” ( 1 )