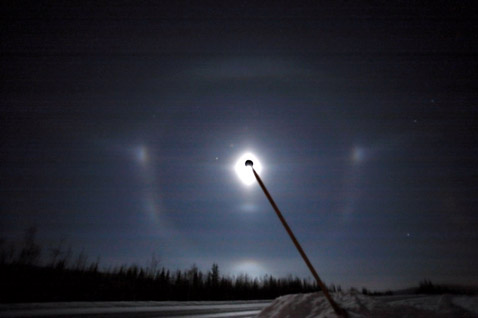 A one night cold snap in Fairbanks on 24 January produced the above display with halos from pyramid crystals. Let Walt Tape, who took the photo, tell more:

“The temperature was between -25 and -30 °F (-32 and -34 °C). The crystals were probably power plant products, but I am not absolutely certain of that; there was a gap in the crystal swarm that occurred between the main plume and the area of the display. I did not see the 9° or 24° arcs in the spotlight. The photo was taken on the main highway between Fairbanks and Anchorage, which was not getting heavy traffic at 5am”.