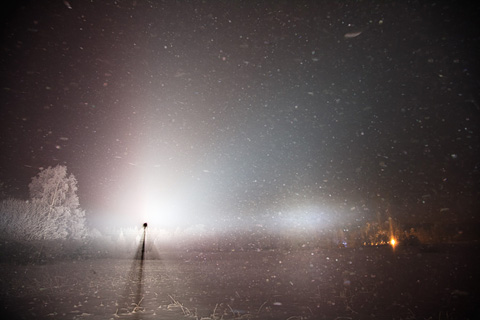 The halos were seen in diamond dust that was generated by my water ice nucleation agent gun operating ca. 1 kilometer away from the site of the observation. The nucleation agent gun can operate autonomously for hours since the water supply is automated. The temperatures varied between -22 and -27 degrees Celsius.

The image above shows some colour artefacts (the background sky is not even color) as we were also testing Riikonen latest HID lamp (Marko Riikonen accompanied me during this night) that has two high intensity discharge bulbs. Unfortunately we were only able to fire up one bulb. Two bulbs would have produced a more even beam in terms of colours and luminosity.

Full image gallery is available (1). It also contains a lengthier account on the evening.

The nucleation agent gun can be seen in action in a separate photo gallery (2).