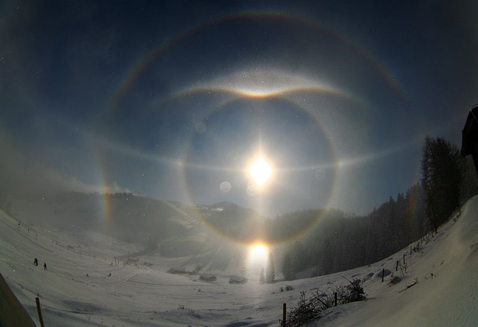 The types of halos and their brightness sometimes changed within minutes.

The halo phenomena occured in the Sudelfeld, which is a mountain saddle at an altitude of ca. 1100 m. Low stratus clouds drawing in from the Inn River valley dissolved there and fell out in ice crystals. The Sudelfeld being a popular skiing resort, this morning two snow making machines (“snow guns”) were also working, but shut off near 11 o’clock. Jari Luomanen suggests that the snow gun produced nucleation agents also took part in the nucleation process of the stratus which then continued even after the guns stopped operating.