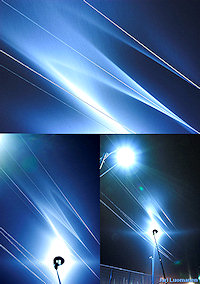 This divergent light effect was observed around power cables that reflected light from a bright lamp. The lamp was positioned behind and above the cables. The bulb of the floodlight can be seen through the dark filter.

The photographs were shot between 1 and 2 am, 29 November 2007 in Tampere, Finland. At the time of the observation the ambient temperature was -4 – -3 degrees Celsius.

The cables’ surface appears to reflect light very well. The effect was visible from a rather narrow sector only. As the observer moved sideways, the effect disappeared. At the peak of its intensity, when the telephoto shot was taken, it was very bright. The effect was clearly defined as is shown in the photographs.

Divergent light parhelia as well as upper and lower tangent arcs were also observed. The divergent light upper tangent arc can be distinguished as the diffuse glow above the lamp. In the telephoto shot it manifests itself in the individual crystal trails between the camera and the cables. In this sense, the image shows two halos on top of each other. Strong pillars and UTAs were observed above light sources further away (see image 2).

The effect around the cables had a 3D appearance, like a vortex or a funnel, but it did not extend towards the observer. Rather, it seemed to encapsule the cable. The other halos that formed in the light of this lamp had a strong 3D character. Both tangent arcs as well as the parhelia arched along the Minnaert’s cigar from the eye of the observer towards the lamp. Unfortunately, this 3D effect cannot be satisfactorily captured in a still photograph.

Earlier that night it had proved difficult to photograph crystal samples due to high temperature. Towards the end of the display the temperature had risen to -3 degrees Celsius. Hence, no crystals were photographed during the observation. However, the known halos observed suggest that singly oriented columns and plates were prominent in the crystal population.

At the time of the writing (10 December 2007), the cause of the effect remains unknown. Hypothesises concerning the nature of the effect are most welcome as are previous observations in case there are any.